A brief history of the Welsh costume

The traditional Welsh costume was originally adorned by rural women in Wales during the 18th and 19th centuries. It was worn as a traditional costume by wives and daughters of wealthy farmers, wearing the costume to either go to market to sell their produce or for special occasions. It was first worn by girls as a celebration on Saint David's Day before the First World War, since then the costume is now recognised as the Welsh national dress

The traditional Welsh costume as a whole went out of general use from the 1880's. Only selected elements of it became adopted, as the Welsh national dress continued to be worn by women at special events such as Royal visits, choirs, church attendees and fund raising events. The Welsh national dress was particularly worn at Eisteddfodau; a Welsh festival of literature, music and performance.

There is little evidence that traditional Welsh costumes existed before 1770. English visitors who toured Wales during the 18th and 19th centuries identified the costumes as being different from what the rural women of England would usually wear. Accounts regarding the costume were recorded in the texts and etchings of the time. The women in rural parts of Wales wore a more distinctive Welsh costume, varying from place to place, whereas in towns, women who lived near busy ports and the Welsh-English border were already wearing English fashions made of cotton.

During the 1830s Augusta Hall (later became Lady Llanover) wanted to preserve these Welsh traditions from the different parts of Wales.. She kept records through prints and drawings, promoting the Welsh language and culture. Some of Lady Llanover's prints were published in an article in 1951 but there is no evidence of her other prints being widely distributed. Her influence lives on today in her ideas of what an idealised Welsh costume should be and has become the basis of a recognised form of our National Costume. 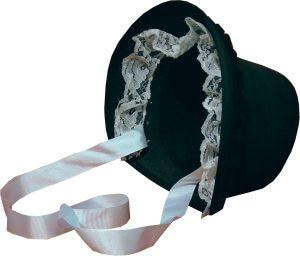 The young women who wore the Welsh costume from the 1880s for notable occasions were seen with great pride and the spirit of the new Wales. The Welsh costume became associated with success since the Welsh ladies choir adorned the national dress, and went on to win a prize at the Eisteddfod World's Columbian Exposition in 1893. From then on they sang for Queen Victoria and performed at events throughout Britain.

The Welsh costume was considered special and sold at market even at the early date of 1832 with nearly every female member of the Royal family since Princess Victoria's visit being given a doll dressed in Welsh national dress when they visited Wales. Aproximately 80 of these 19th century dolls are still in existence with many gracing the oldest surviving Welsh costume fabrics of their kind.

The costume has been modernised over the years, made by mothers from old costumes and worn by girls on St David's Day and is now commercially available.

You'll find a fantastic range of Welsh costumes for men, women and children at Welsh Gifts. Choose from a collection of Welsh national dress costumes, traditional tweed hats for boys and bonnets for girls, as well as aprons and shawls. We also have a selection of brooches to help complete your outfit, including the daffodil and the leek to celebrate Saint David’s Day, as well as the famous Red Dragon. Order yours online today!

Shop For A Traditional Welsh Costume

We are very sorry, but the browser you are visting us with is outdated and not complient with our website security.

Please upgrade your browser to a modern secure version to view our website.